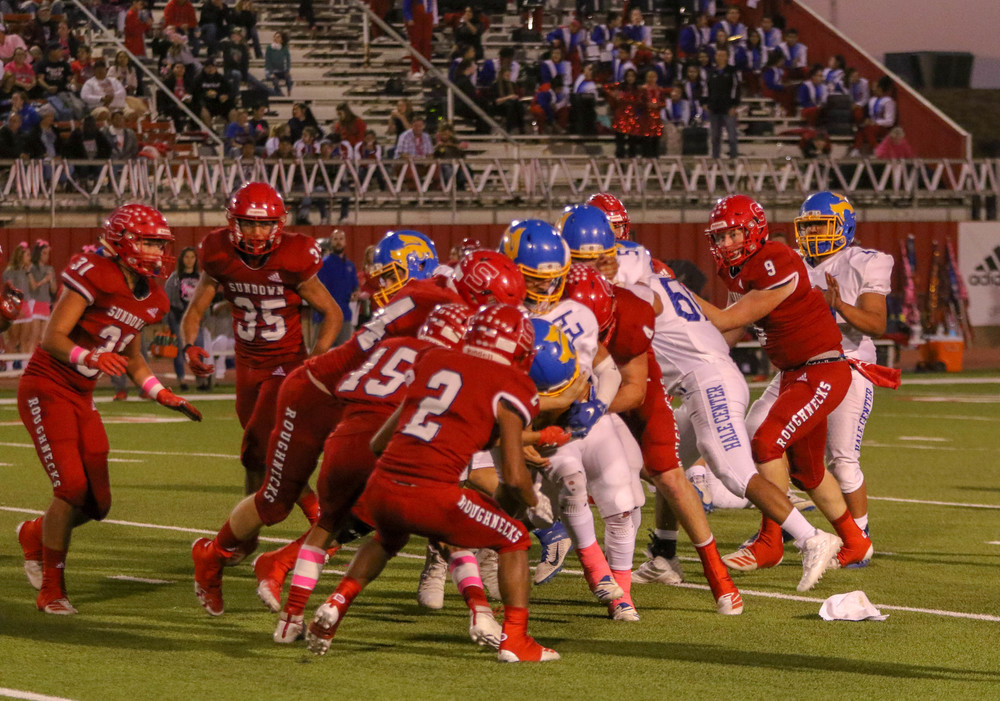 Sundown demolished the Owls Friday, October 18th, with a whopping score of 50 to 7, to become 2-0 in district and 5-2 on the season.

The Roughnecks man-handled the Owls from the start of the kickoff at 7:30. The varsity boys had a pretty good game when it came to physicality. The Roughnecks running backs had a total of 332 rushing yards and 126 passing yards. The lead rusher this week was #26 Cade Conway with a total of 146 rushing yards followed by #5 Gabriel Guardiola with 95 rushing yards. The ball went through the air fourteen times with eleven completions from leading passer Christian Huey. The senior threw the ball for two touchdowns to #42 Gus Davis and #15 Brayden Sanders.

The Defense simply obliterated the Owls offense Friday night at Slaughter Field. The Sundown defense had one interception by #15 Brayden Sanders and held Hale Center to only 246 yards while Sundown had 458 yards offensively for the night. The defense wrecked the line of scrimmage only allowing 13 first downs and one touchdown. The Owls completed only one of six fourth down conversions while the Roughnecks were four of five on fourth downs.

On the win, Head Coach Adam Cummings commented, “I think our kids just played physical and with some energy and controlled the line of scrimmage.” When asked what is a key factor when getting to face #6 in the state Post on Friday, October 25th, he said, “I think we need to continue to raise the standard; I don’t think it’s as much as Post as it is the standard we play at.” Coach Cummings added, “We have to focus on our preparation starting Monday through Thursday and just do the little things right during practice whether it be our attention to details, our focus, our discipline. But we also gotta bring the energy and the tempo we practice with then the outcome tends to take care of itself.”