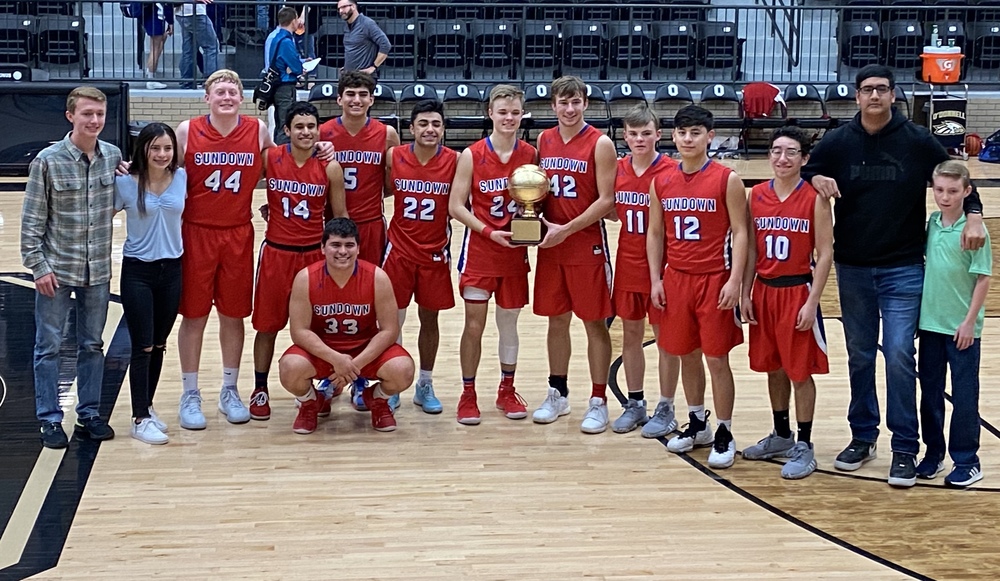 The Roughnecks played an extraordinary 40 minute game against Stamford. The game went into double overtime with a final score of 73-70 favoring the Roughnecks, bringing home another gold ball for the trophy case.

At the end of the first quarter, the Roughnecks lead Stamford 11-5. After the next eight minutes, Sundown was down 10 at halftime 16-26 to the Bulldogs. The boys had a big mismatch inside dealing with their 6’10" post player, who had 15 points in the first half. Sundown came out strong after the half and were down by 4 with a score of 38-34 the end of the 3rd quarter. In a playoff game, the goal is to keep the game close so in the 4th quarter there is a chance for a win. The Roughnecks followed the game plan perfectly.

In the fourth quarter, the Bulldogs scored 12 points to the Roughnecks 16, putting the end of regulation score tied 50-50. The boys then battled the Bulldogs through two overtimes. The first overtime ended with a score of 59-59 after Brice Legan’s clutch shot with :05 left tied the game. That put another 4:00 minutes on the clock for the Roughnecks to claim the win. The Roughnecks faced some adversity with Carson Boggs, Gus Davis, and Legan all fouling out of the game; however, the rest of the Roughnecks were ready and willing to step up to contribute.

Senior Omar Lopez made clutch free throws making 6/7 in the second overtime to build a lead. Senior Jesus Martinez came off the bench to secure 2 huge rebounds on defense, then made both of his free throws after being fouled. The second overtime ended with a score 73-70, with the Sundown Roughnecks ahead. The players went in the stands to celebrate with Roughneck Nation.

Our Sundown Roughnecks have battled every week through every game. Coach Igo responded to this historic win, “The guys showed grit for 40 minutes to win this game. I am so proud.” Despite Stamford’s post player scoring 44 points, four Sundown seniors had double digits: Brice Legan with 25 points, Micheal Ojeda with 18 points, Omar Lopez with 12, and 11 total for Gus Davis. Every point counts in a double OT win: Carson Boggs scored 1 free throw, Brandon Kenley had a huge offensive rebound and bucket for 2 points late in the game, Jesus Martinez had 2 free throws, and Carson Holson secured a field goal in the paint in OT. Every player contributed to wearing down the Bulldog defense, and then capitalizing on the offensive end.

The Roughnecks play Tuesday, March 3rd vs. Christoval at Garden City High School.  The boys are hoping to fight their way back to the regional tournament by winning the Regional Quarterfinals game vs. the Cougars. The game will be broadcast on KLVT Radio. We hope to see the Roughnecks continue on this path of success. GO ROUGHNECKS & MAN-UP!