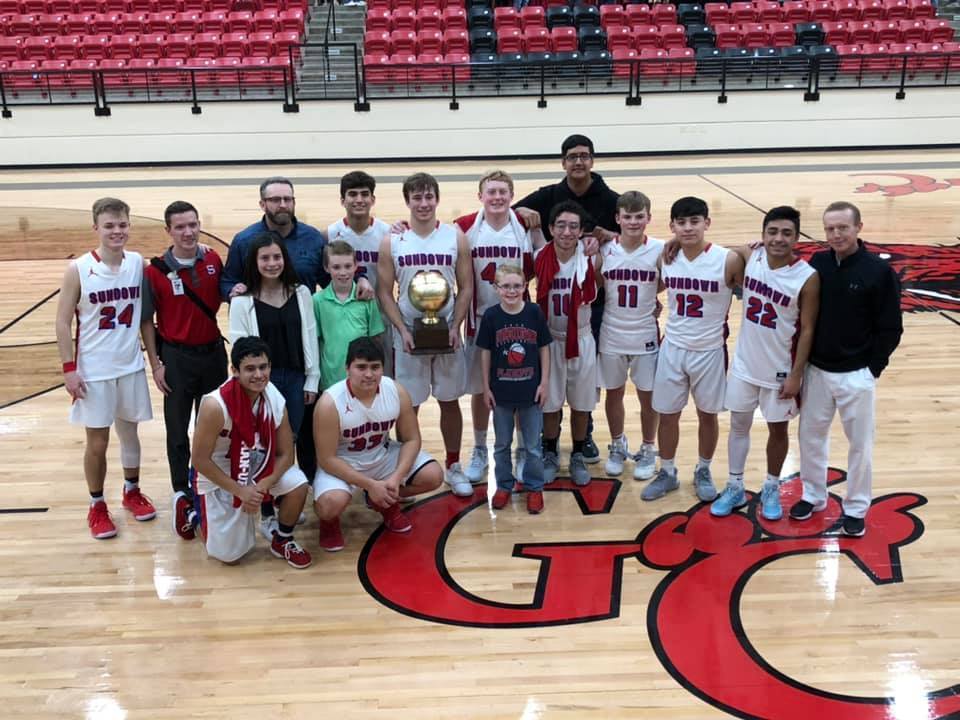 The Roughnecks played a solid 32 minute game against the Christoval Cougars. The boys led the game from the tip off until the final buzzer and came out with a huge win 57-41. The Roughnecks brought home another gold ball to the trophy case and punched their ticket to the Regional Semi-Finals this Friday, March 6th vs. Vega Longhorns at 6:30pm at the SPC Texan Dome.

At the start of the game, the Roughnecks came out strong. #22 Michael Ojeda drilled in a three point shot to start off the game. Then seconds later after the Cougars made a two point bucket, Ojeda drained another 3 point shot and extended the lead for the Roughnecks. #14 Omar Lopez contributed to the team by then putting up 2 points for the Roughnecks. #42 Gus Davis drove in strong into the paint multiple times and put up 8 points in the first quarter. Also #44 Carson Holson put up two more points on the block to extend the lead to 21-15 after the first 8 minutes.

In the second quarter the boys played strong. Brandon Kenley, Michael Ojeda, Brice Legan, and Gus Davis put up two points each for the Roughnecks to strengthen up the lead. Going into halftime the Roughnecks were up over the Cougars 31-24.

Starting out the second half, the Roughnecks were driving the ball up and down the court. Brice Legan hit the first three for the Roughnecks in the second half. Gus Davis drove into the paint and put up 4 points for the good guys. The Roughnecks played an exhausting third quarter, but still played strong to keep the lead of the game. At the end of the third, Sundown still held the lead over the Cougars with the score 42-29.

The final score was 57-41 with the Roughnecks coming out with a victory. Gus Davis lead all scorers with 17, with Michael Ojeda adding 15 points total. The boys played an outstanding game with all Roughnecks seeing time on the court and all players doing their job respectively, which helped them earn a trip back to the Texan Dome for the second year in a row!

This Friday, the Roughnecks will be taking on the Vega Longhorns at the Texan Dome in Levelland, Texas. We encourage all Roughneck fans to show up early to buy tickets and watch the boys play and hopefully come out with a win and advance to the Regional Finals. Admission is $4 for students and $6 for adults. The game will be broadcasted on KLVT Radio. GO ROUGHNECKS!!!! BEAT THE LONGHORNS!!!!