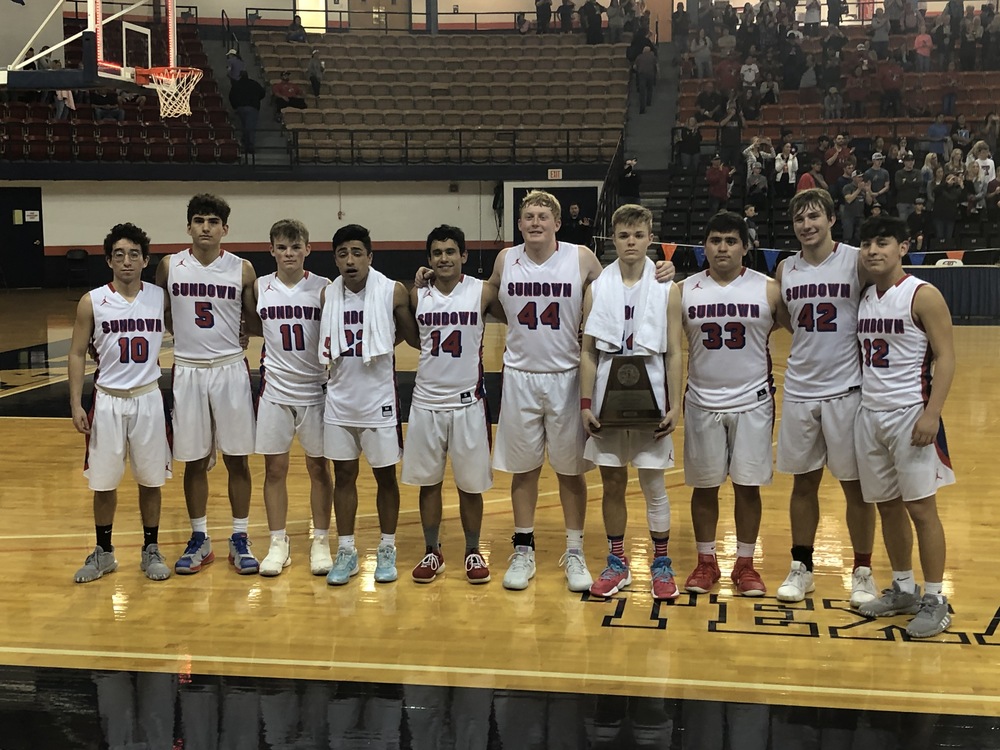 The Roughnecks played yet another solid game against the Vega Longhorns in the Regional Semi-Finals for Class 2A. When the boys walked onto the court at the Texan Dome, they were overwhelmed with how many supporters showed up. The student section had their biggest gathering, and were screaming at the top of their lungs for 32 minutes to cheer on the Roughnecks. Sundown once again led the entire game from tip off to the final buzzer and came out with a historic win 69-58. The boys brought home another gold ball for the trophy case and punched their ticket to the Regional Final game against Gruver. This is the first time since 1953 the Roughnecks advanced to the Regional Finals.

The second quarter was a battle for the ball. Both teams were fighting for possession, but struggled gaining points for their respective teams. After all the clawing and scratching for the ball the Roughnecks put up 16 points, while Vega scored 13. Towards the end of the first half, a Vega player tried to trip #42 Gus Davis after a rebound and the halftime horn sounded. The ref saw it, blew a whistle, and gave him a technical. The half ended 29-22 with the Roughnecks in the lead 29-22.

To start off the 3rd quarter, #24 Brice Legan sank in two free throws from the technical before the half. The boys played an exhilarating third quarter, and still managed to hold onto the lead. The boys gave it their all in the third and still came out on top 45-36 with 8 minutes remaining for the players and Roughneck Nation.

In the fourth quarter the boys gave it their all to push to the end of the game. They played incredible defense and offense. Towards the end the Longhorns had to start fouling in order to stay in the game, but the Roughnecks kept sinking in their free throws. The defense held them at the last seconds of the game and it was too late for the Longhorns to catch back up. The ending score was 69-58 with the Roughnecks coming out with a huge win.

Each player did their part respectively. Omar Lopez made 3 points with Carson Boggs adding 5 points. Gus Davis made 9 points, but also snagged an impressive 12 rebounds. Carson Holson made 2 points, but had a total of 7 rebounds. With 19 rebounds between them, Davis and Holson dominated the inside defensively along with Brandon Kenley’s 2 boards. Michael Ojeda scored a total of 16 points, and Brice Legan was the leading scorer with a whopping total of 34 points! It was another Roughneck win for the record books.

On Saturday, March 7, the Roughnecks played the Gruver Greyhounds for a chance to go to State. Sadly, the Roughnecks ended up coming short and lost the game with the score being 66-42. The Roughnecks gave it all they had against a team that was ranked #5 in the state. Congratulations to the boys on a great season and being Regional Finalists.

The Sundown Roughnecks were made up of 7 seniors. Each and every senior was a leader and stepped up to the court. Those 7 seniors include: #10 Nick DeLaCerda,  #12 Jon Torrez, #14 Omar Lopez, #22 Michael Ojeda, #24 Brice Legan, #33 Jesus Martinez, and #42 Gus Davis. These seniors have given us amazing memories on and off the court. We will forever be grateful to these seniors and wish them best of luck in their next adventure.  GO ROUGHNECKS!!!!!