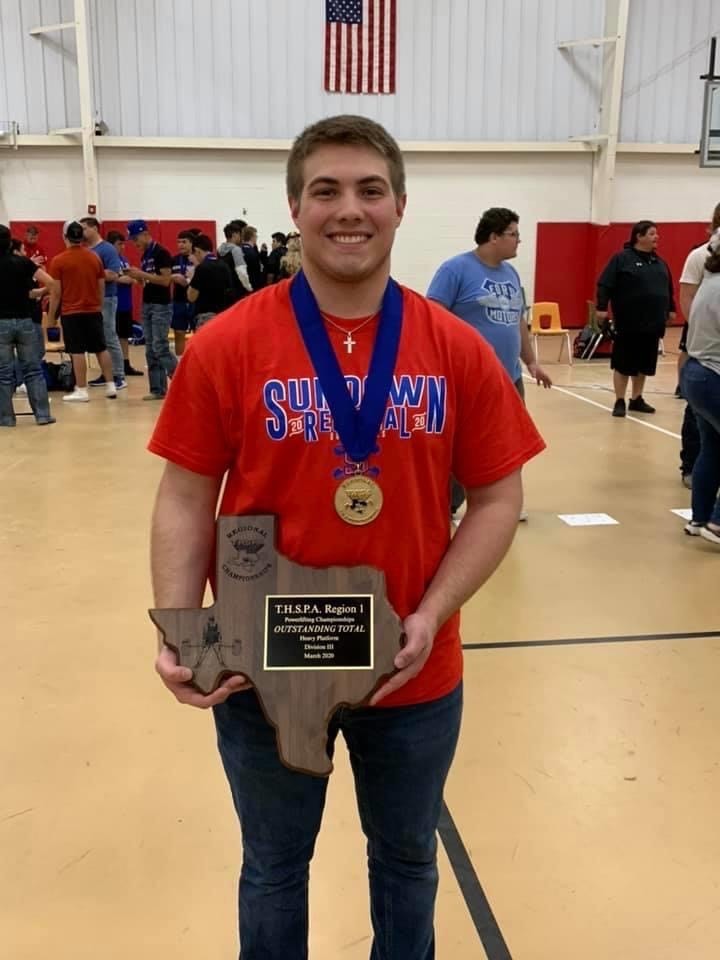 On March 13-14, Sundown hosted the Boys Regional Powerlifting Meet at the SHS facility. On Friday, Sundown hosted the bigger schools powerlifting meet which started at 8:00 in the morning. Later that day, the smaller classifications traveled to Sundown to have their lifters weigh in for their powerlifting meet, which would be held on Saturday. After the weigh-in, which started around 5:00 pm, the lifters went home and had a good night's rest for the following day. Sundown had 14 boys QUALIFY for the regional meet, which shows how tough they are, and how awesome their coach is! Awesome job guys!

In the 181’s Blake Hulse, EJ Hernandez, and Kevin Garcia all competed against each other. Blake Hulse did an outstanding job. He placed 1st with a total of 1470 lb’s, and won the best overall lifter on the heavy weight platform, which means he was one out of the two strongest lifters at the meet. That is an extremely hard thing to accomplish. Good luck at State, Blake!

All together the Sundown team placed 3rd with a 16 point total. Coach Newton was elated, “What an accomplishment! I am so proud of this group of young men and all they have accomplished all season. To have 14 lifters at the regional meet is outstanding and it's just a testament to the time, effort, dedication and GRIT that these kids have displayed all year.  Our three seniors have set a standard and the younger kids are buying in and have some huge shoes to fill. I cannot wait to see what our future holds.” Congratulations once again to Coach Newton and all of his lifters!