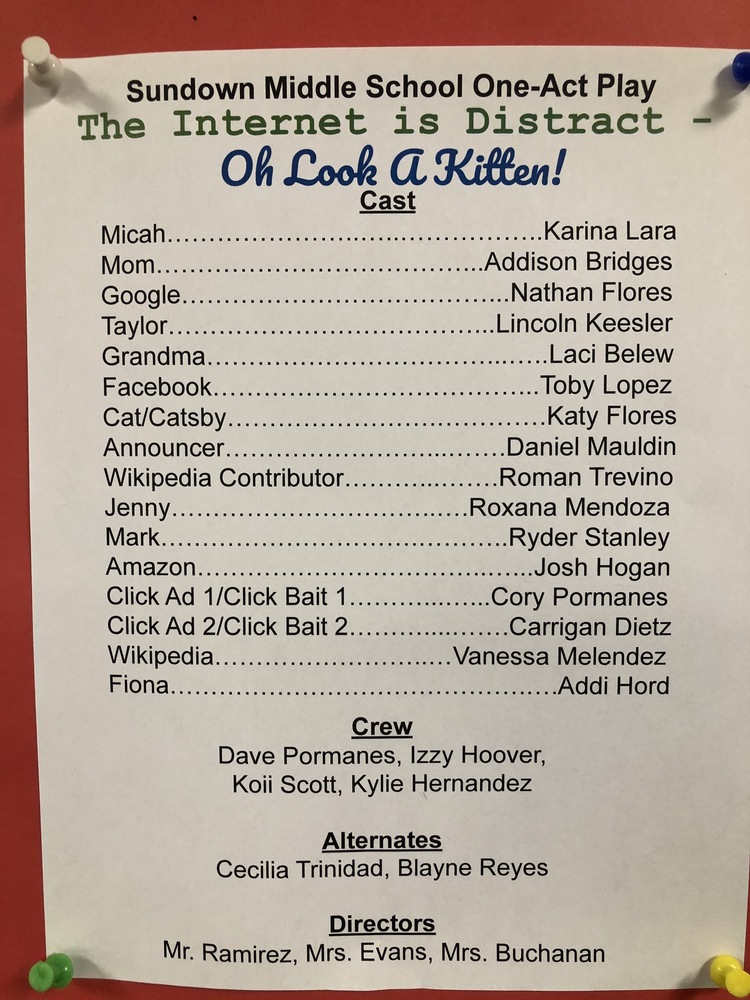 On Tuesday, September 8th, Mr. Ramirez, who has been working with OAP here in Sundown for 11 years, along with Mrs. Evans and Mrs. Buchanan, the other directors of Middle School One Act, hosted auditions. The cast has been posted and practice has begun.

The play is called “The Internet is a Distract- Oh, Look A Kitten!”. The main plot is a young girl who has to write about The Great Gatsby in twenty minutes because she kept getting distracted by ad pop ups and other internet things. The play is a way to display how distracting it is to be a teenager in this age of social media. Mr. Ramirez chose this play for multiple reasons, such as the relevance it has in today's society, but it was also chosen because it would be easier to follow social distancing guidelines due to Covid-19. The social distancing has provided quite the challenge for the directors. With Covid, they have had to keep in mind the six feet apart rule and it makes it a little harder for them to prepare a more challenging show.

The chosen members of the cast include a variety of 6th, 7th, and 8th graders. Most of the 7th and 8th graders are kids who were members in the past. Mr. Ramirez was very enthusiastic about the abilities of the cast, saying, “They’re all very good!” The school performance does not have a set date yet, but they do have the performance for the public on Thursday, November 19th and the district competition two days later on Saturday, November 21st. They have one final performance at a festival on December 5th.

One act play seems to be going quite well despite the setbacks, and we can expect great things from our Middle School students.