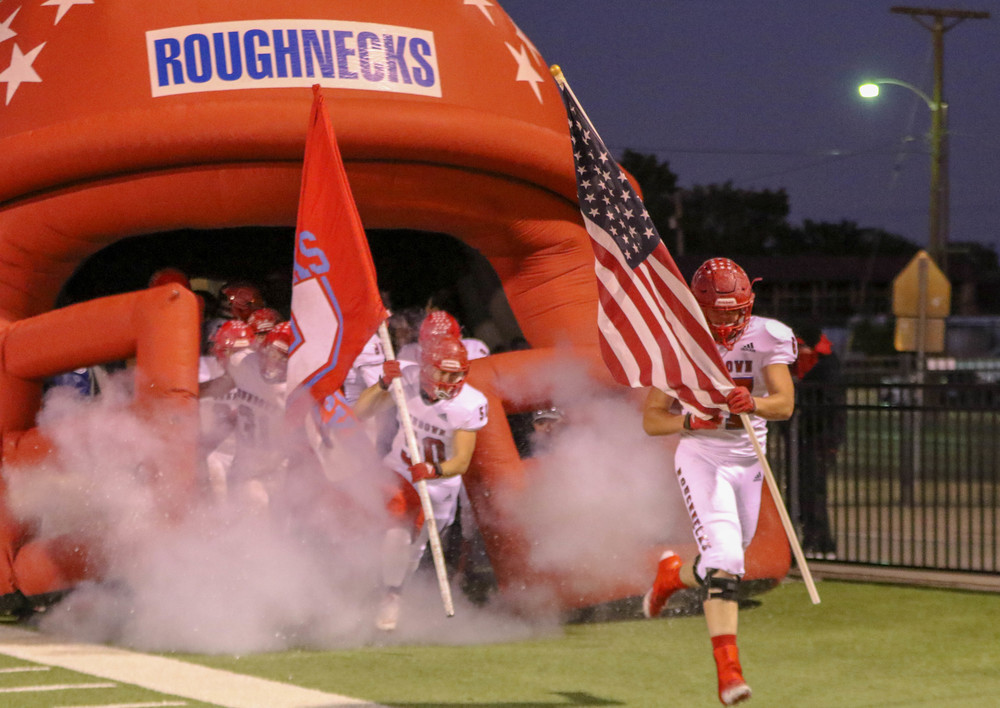 The Roughnecks Gallop Over the Mustangs

Your Sundown Roughnecks stampeded the Olton Mustangs with a lopsided score of 54-22. The Roughnecks are 3-1 in district play and 6-3 on the season.

The Roughnecks ran over Olton at the start and never let off the gas. The Sundown defense was relentless when it came to Olton running the ball. Olton only had 101 yards rushing while the Roughnecks had 423 total. Leading rushers were #26 Cade Conway with 204 yards and #7 Ej Hernandez with 164 yards. Senior quarterback #3 Christian Huey threw the pigskin for 111 yards with a compilation rate of 88.9%. Huey’s main targets Friday were #42 Gus Davis and #25 Micheal Ojeda with a combined total of 111 yards. Overall the offense obliterated Olton’s defense. Offensive linemen of the week was #65 Andy Castillo for his solid play in the game.

The Roughneck defense held the Mustangs to only 22 points with 74 plays ran. Defensive of player was #13 Gavin Richardson with 17 tackles. Sundown came out firing on all cylinders Friday night. The Roughnecks did not allow any 4th down conversions and only 101 total rushing yards. Senior Jonathon Torrez, #22, had an interception after the ball hit a couple of finger-tips and the ball landing in Jon’s hands. The defense was phenomenal and they hope to stay that way against New Deal on Friday night, November 7th, for the last home game of the season.

Head coach Adam Cummings commented, “We controlled the line of scrimmage; I felt like our offensive and defensive lines did a good job of doing that.” When asked about about what the Roughnecks need to do to prepare for New Deal he responded, “I think it is the same as the past few weeks, we just have to execute at a high level and be more physical than them.”

Talking to Coach Jeff Lyles, he said, “I think we came out early and got a couple of stops even though they moved the ball well.’’ When asked about New Deal he said, “Our defensive line needs to know where to line up. We have to be able to make open field tackles and it starts with our linebackers and ends with our corners and safeties.” He also added, “The offense needs to know who to block,our running backs need to hit the hole hard and continue running, and our quarterback and receivers have to throw and catch at a high level no matter what weather conditions we face.”

After interviewing Senior #58 Raymond Fonseca, he believes, “I think our offensive and defensive are pretty solid and held the line of scrimmage, and our backs would hit the hole pretty hard and we just excelled on all cylinders. Raymond Fonseca answered on how the Roughnecks can seal the win against the Lions. He said, “We have to start out fast, we need to be tough, we have to have a great week of practice, and pay attention to the little things.”

Your Sundown Roughnecks Face off with the New Deal Lions Friday at Slaughter Field. It is also parents night for all managers, football players, cheerleaders, and band members. Don’t miss out. GO ROUGHNECKS!!!!!!!