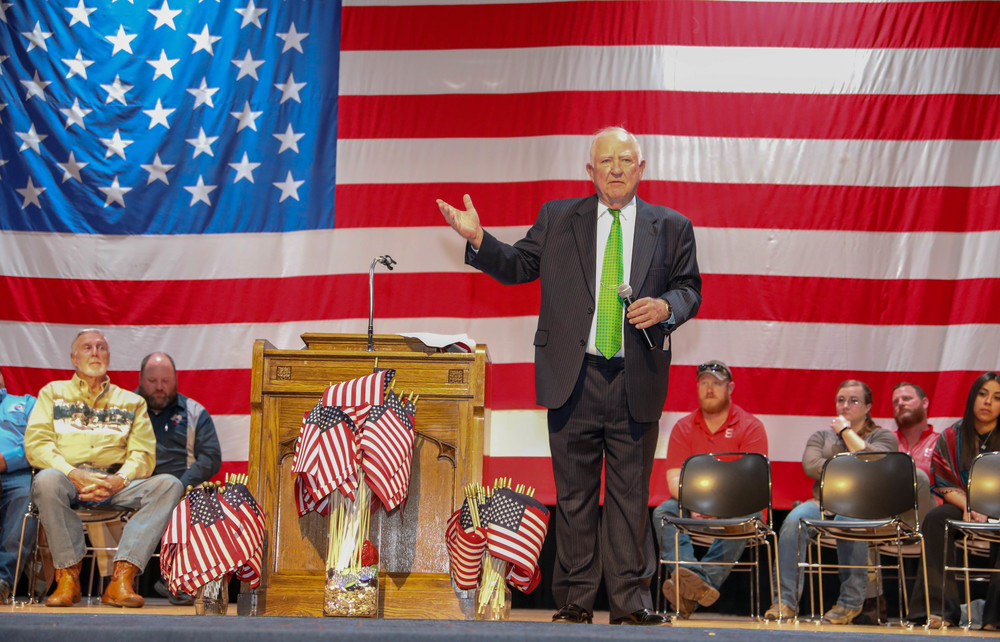 A Tribute to our Veterans

Veterans Day is always held on November 11th in the United States. On Monday the 11th at 10:00 am, Sundown Middle School hosted the 2019 Veterans Day Program for the 28th consecutive year.

The assembly started off with the Pledge of Allegiance in which Landry Farrar led. Julie Villegas introduced the National Anthem, which was played by the Sundown High School Band. Shortly after the Anthem, America Heroes (Letters from War) was performed by the SHS Band along with actual video footage shown from the Vietnam War. Sundown’s very own Veterans spoke at the assembly. Maycee Motheral introduced Butch Foster and he spoke and shared a few of his heroic memories. Taylor Garcia introduced her Uncle, Adam Hernandez, who also told of his military days. Laura and Emani McMinn introduced their father, Frank McMinn who shared a bit, and Riley Goodman who was introduced by both of his kids Corey and Dave Pormanes. Cody Bridges was also introduced by his son, Trevor Bridges. Janie Perez introduced Butch Giddens and Donald K. Leonard.

Coach Kevin Torres then read 200 names of Sundown’s Veterans from a list that has been compiled over many years. The assembly was wrapped up with a two minute moment of silence in remembrance for all Veterans, followed by Branson Sander’s closing prayer.

SHS would also like to thank Kevin Torres and his students for playing an integral role in the assembly. Coach Torres also recognized SMS secretary Janie Perez for putting the assembly together for this year, as well as the last 28 consecutive years. We remember our Veterans every day, but especially on November 11th each year.

“I believe this is what Honor looks Like!!! To respect a local HERO, not just as gridiron icon, but most importantly an American!! One who unselfishly Sacrificed for OUR country so ALL have the freedoms We so often take for granted. I personally feel that the TRIBUTE  by OUR ROUGHNECKS, COACHES, CHEERLEADERS, and STUDENT BODY exemplifies What is good with this country:

It is through the actions of our youth that I hold firm That we The United States of America, is and always Will be the greatest nation on Earth. We are here today to remember their Achievements, Their Courage and Their Dedication, and to say THANK YOU for all their sacrifices. Thinking of all our heroes who join us in this group today and those who are here in spirit, a person can’t help but feel awed by the enormity of what we encounter. We stand in the midst of patriots and the family and friends of those who have nobly served. THANK YOU."