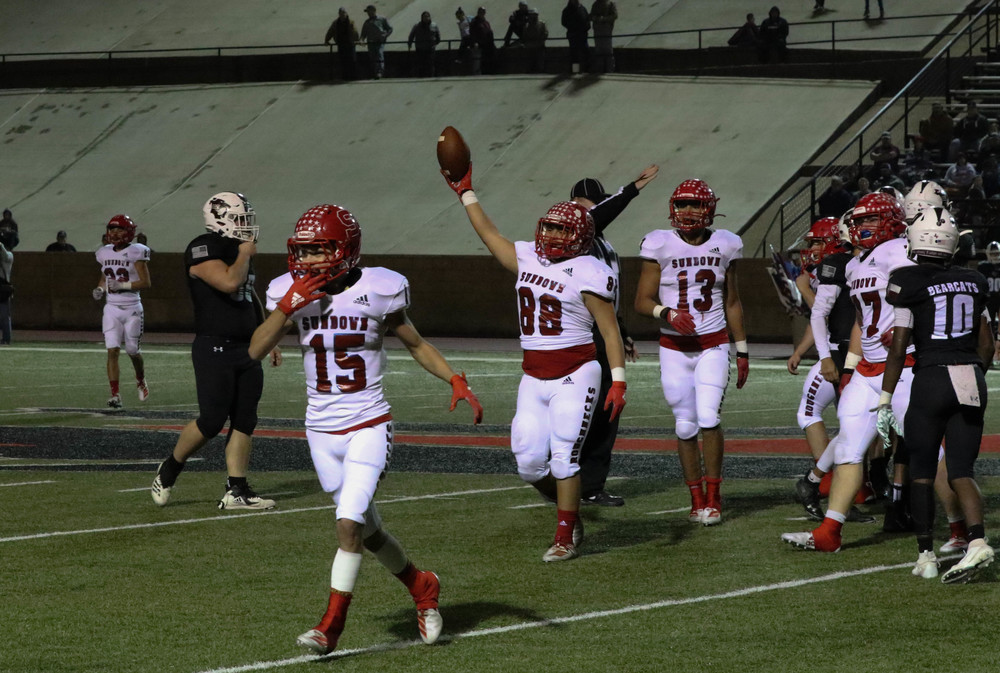 The Catch That Should Have Been

Sundown’s offense put on a show with 64 plays ran and 405 total yards gained. Sundown Quarterback #3 Christain Huey had 236 passing yards and 55 rushing yards. Christain threw the ball three times to junior #35 Brandon Kenley, and all three times for a touchdown, keeping the Roughnecks in the game. Senior Gus Davis came back from an injury after missing the first two playoff games and had a total of 96 receiving yards. Wide receiver  Michael Ojeda had 73 receiving yards. Gavin Richardson had his best offensive game all year with three receptions for 44 yards. Sundown running back Cade Conway had an outstanding year at running back with a total of 1,226 yards for the season. Senior offensive lineman paved the way each and every down: #77 Dylan Day, #67 Tripp Richardson, #66 Blake Hulse, and #54 Seth McDaniel.

The Sundown Defense held their own when it came to a tough Bearcat offense and only allowed 46 total plays and 429 total yards. The Defense busted their tail ends for every down of the game and stopped the Bearcats. Defensive player of the week will have to be Junior safety #15 Brayden Sanders who stopped #44 Colton Marshall from some big plays in the open field. The defense had an amazing game and fought with blood, sweat, and tears on the field. We are extremely proud of our Roughneck boys that showed a tremendous amount of grit. We’d like to thank all of our senior defense players including #4 Kaden Marshall, and #22 Jon Torrez.

“We are proud of our boys this year, They and a wonderful year and we hate to see it come to an end.” said coach Barry Newton. When asked what is next for the Roughnecks he responded with, “We rebuild, we hit the weight room hard so we can get stronger and faster for next year, but we focus on our boys are getting ready for basketball and the sport ahead of us.”