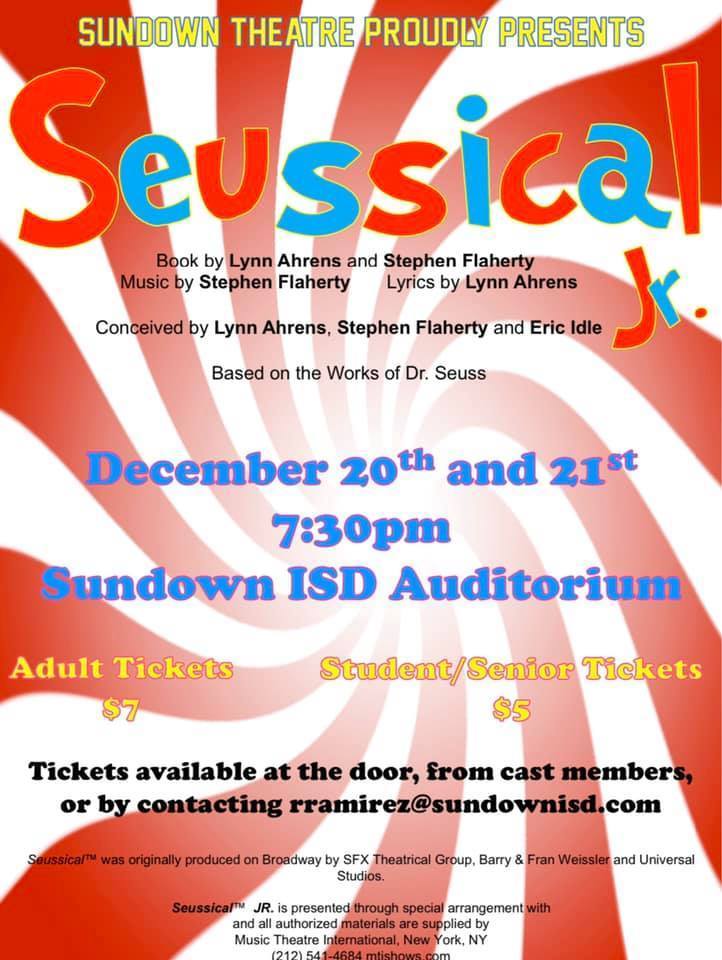 The Sundown community has a special gift awaiting on Friday and Saturday, December 20 & 21st as “The Seussical” musical will be presented both nights at 7:30pm in the Sundown Auditorium.

“The Seussical” has over 60 kids in the cast and crew. These brilliant kids that are participating range from kindergarten to seniors in high school. “It's a big range of kids with talent and experience. It's been a lot of fun getting to work with little kids and big kids all at the same time," director Mr. Randal Ramirez said. “It's a combination of eighteen Dr. Seuss stories all combined into one giant story and set to music. The main story is about Horton the elephant.”

The cast and crew have been working on Seussical since September. Junior Peyton Hastings, who plays the lead role of Cat in the Hat as well as the choreographer, commented, “It's a lot of fun!” In a week, they put six to eight hours of work into practice. The show time runs about an hour and fifteen minutes. People should definitely come see the show, because it's been a lot of hard work for the cast and crew members; it is a great combination of ages and talent from Sundown students.

The tickets are $7 for adults and $5 for students and senior citizens. The tickets can be purchased at the door. Anyone can buy the plentiful gift baskets that the show has provided for the guests. Also the show will have interacting stuff like stars that you can be purchases for $1. Anyone can write notes on the stars that can be given to the cast & crew. This show has not only helped benefit the cast and crew in gaining experience, but will also raise money for the One Act Play competition next semester. See you at the SISD auditorium this weekend!