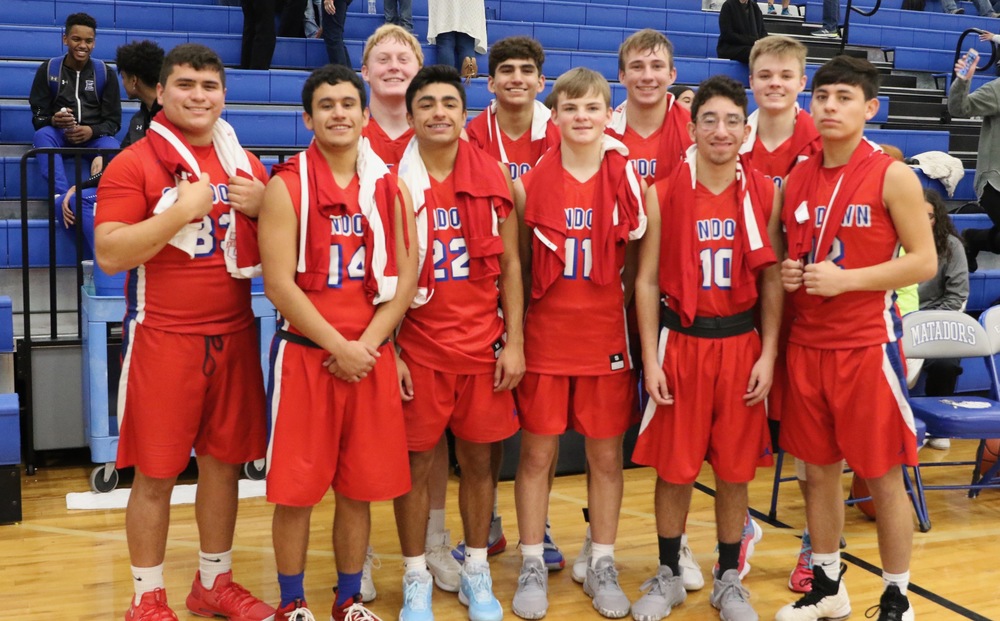 The varsity boys got off to a rocky start as they started the season with a couple of losses, but as the boys are progressing through their season, they are learning a great deal by practicing and watching film so they can get back on the right track. “The varsity boys have a tough non-district schedule as they face bigger schools and top ranked teams,” said Coach Igo. The Roughnecks opened up the season in the Nazareth tournament against the Gruver Greyhounds, a team that got second place at the state finals last year. The Roughnecks fought ferociously against the Greyhounds but came up short with the score being 52-37. The Roughnecks then played in the Dimmint tournament but came up short by losing 2 of the 3 games they played. The Roughnecks competed in the annual Caprock Classic tournament in Lubbock over the Christmas break. The boys went 2-2 by beating Rankin and Kingdom Prep and losing to an outstanding Idalou and Slaton team.

The Roughnecks then traveled to Spur, Texas in the middle of the Llano Estacado. The boys played an outstanding game against a very good Spur team. The Roughnecks came out swinging by delivering the first blow and taking the lead of the game. In the second half the Roughnecks played until every last drop of sweat was spilled, which led to the Roughnecks delivering the final blow to the Spur Bulldogs with the score being 57-42 with the Roughnecks coming out on top. On January 7th, the Roughnecks traveled two hours to the middle of the desert in Roswell, New Mexico. The Roughnecks went up against the Goddard Rockets. The boys played their hearts out, but the Rockets were too much too handle. “Roswell Goddard is a tremendous 5A team and are a very tough opponent to face,” said Coach Igo. “We learned that we need to execute our half court offense a lot better and we also learned we gotta get a lot better at rebounding the ball,” said Coach Igo. “Overall we did a lot of great things, but we need to get back to work and become even better than we are,” said a pleased Coach Igo. “Our biggest thing we need to work on going into the season is playing with more effort and rebounding the ball, when we direct our focus on these factors, I like our chances in district.” said Coach Igo.

Last Friday, the Roughnecks played the Hale Center Owls in Sundown. It was a two point loss for SHS the second game of the season; however, this time the team played solid from the first to the fourth quarter and came out on top 57-33 to avenge the loss early in the season. The Roughnecks will play the New Home Leopards on Tuesday, January 14th in Sundown at 6:15pm. Come out and support the red, white, and blue. It’s always a great day to be a Sundown Roughneck. GO ROUGHNECKS!!!!!!!!