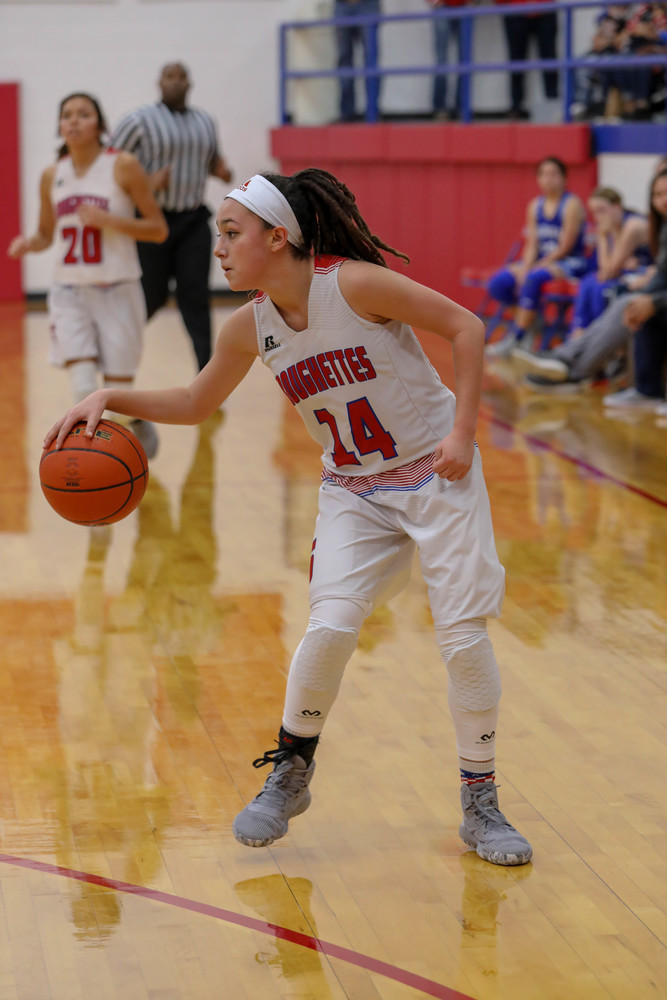 The Roughettes are now 4-0 in district play, finishing the first round undefeated. The ladies had a big win over Tahoka with a lopsided score of 59-8. The girls also won over the Plains Cowgirls on the road with a score of 41-32. The Roughettes are hoping to keep the winning streak alive when they start the second round of district Friday vs. the Seagraves Eagles at 6:15pm at home.

Sundown Played the Cowgirls on Tuesday the 21st. The Roughettes lead Plains in the 1st quarter 14-7; the 2nd quarter Plains outscored Sundown 8-3, but the Roughettes still lead by two at the half. Senior Geneva Cortez led all scorers with 15 points and junior Lexie Lee equaled her teammate with 15 also. Mckenzie Lee lead the team in rebounds with a total of 5. Freshman Natalie Urais lead the team in steals with 4, and junior Emily Rodriguez lead the team with 5 assists.

Coach Legan added two more girls to the varsity team, sophomores Jonna Pool and Karli Torrez. The Roughette team consists of 13 girls and contains girls all the way from freshman to seniors. When the Roughettes played the Lady Bulldogs on Friday night, the score got out of hand pretty early with the combined score of 35 within 2 quarters and the Lady Bulldogs only had 6 at halftime. In the third and fourth quarter the Roughettes had a total of 24 points and the Lady Bulldogs only had 2 points. Nobody on the Roughettes had double digits in points but everyone girl on the team scored points to contribute to the win. Grace McAdams lead the team in scoring with 9 points, followed by Emily Rodriguez with 8, Geneva Cortez with 8, Natalie Urias with 7, freshman Kaydence Loftin finished with 5 points as well as Jonna Pool. AJ McGlasson and Mckenzie Lee scored 4 points a piece, with Lexie Lee and Shea Beadles who made 3 points each. Finishing out the scoring was Alex Rodriguez with 2 and Karli Torrez getting in the books with 1 freethrow. Coach Legan noted the points, “When we all score it is a sign of unselfish play and balanced scoring now in district play leads to playoff wins down the road.”

The Girls start the second round of district games on Friday. We’re all hoping to see girls keep the win streak alive. Student appreciation will be held on January 31st and is sponsored by Burger King. Students, keep packing the stands and this team will keep giving us something to cheer about! The players love the energy from the fans in the stands! GO ROUGHETTES!!!!!!!