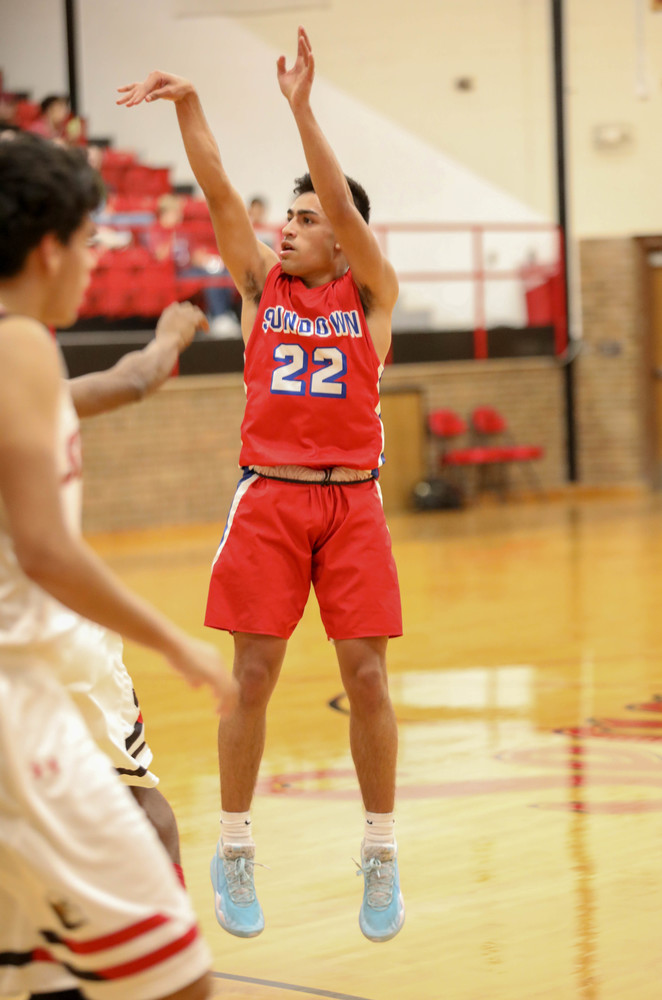 Roughnecks Escape With a Win Over Seagraves in District Play

The Sundown Roughnecks are now 7-1 in district and co-champions after coming up with a close win over the Seagraves Eagles Tuesday on the road. The gym was overwhelmed with Roughneck fans as they came to cheer for the boys in red and blue. The boys are now going to play the Tahoka Bulldogs this Friday on February 21st for a seeding game for the one or two playoff spot in District 5-2A.

In the first quarter, the Roughnecks got off to a jagged start. The Eagles bounced ahead of the Roughnecks in the first. The Roughnecks put up a couple of buckets, but it wasn’t enough to take the lead. At the end of the first, the Eagles were on top with the score being 22-13.

In the second quarter, the Roughnecks were clawing their way back to take the lead of the game. The Roughnecks offense attempted to drive the ball up and down the court and they came up with a couple of buckets to give the Roughnecks more room to catch up, but the Eagles answered back and expanded the lead. At the end of the first half, the score was 39-29 with the Roughnecks down by ten.

“We came out really sloppy in the first half, but when the second half rolled around we came out blazing. Our defense played a really great second half, and I feel like that helped us a lot,” said a pleased Coach Igo. “Omar Lopez played a really great game and and helped the team out by scoring the buckets he drained in. Omar played his best game in my opinion,” said Coach Igo. Senior Omar Lopez said, “Hard work beats talent when talent fails to work hard.” Senior Michael Ojeda followed up, “No matter the score, no matter the circumstance, we are never out of the fight.”

“We got off to a slow start and we didn’t come out the way we wanted to, but Coach Igo made the right adjustments at halftime and we were able to pull away with a dub,” said Senior Brice Legan. Senior Gus Davis summed it up, “Never count us out of the fight.”

Kaden Marshall is encouraging everybody to come out to the game on Friday. The theme for Friday is a jersey theme. They are encouraging all high school students to come through and pack the stands to cheer on the red and blue. The Roughnecks will be playing the Tahoka at Frenship High School Gym. Come out and support the Roughnecks. GO ROUGHNECKS!!!!! CAGE THE BULLDOGS!!!!!!!!!!