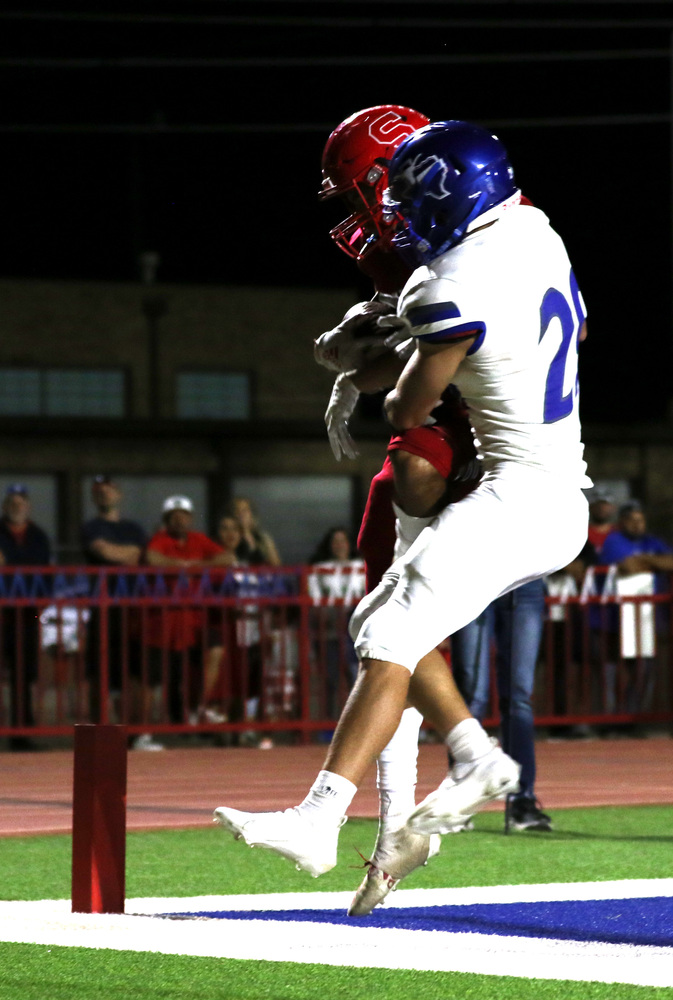 Roughnecks Win in a 6OT Thriller Over the Steers

After a long battle on Slaughter Field on Friday night, the Sundown Roughnecks won over the Farwell Steers 9-7, playing 6OTs in one game.

The Roughnecks quickly got on the board, scoring with 7:32 left in the first quarter when Hunter Tindol completed a 52 yard pass to Koy Torres for a touchdown. Kevin Garcia completed the PAT to make it 7-0. The Steers answered with a 28 yard touchdown pass with 4:27 left before half tying it up 7-7.

After half, the war waged on as the Roughnecks were trying to come away with a Homecoming victory. It was a defensive battle with both teams moving the ball, but not crossing the goal line. Sundown had 148 yards passing and Farwell rushed for 225 yards, but the scoreboard stayed static at 7 points for each team.

The veteran offensive line made up of Jadon McAdams, Jefferey Rodriguez, Chris Castillo, Andrew Hernandez, Andy Castillo, and Diego Hernandez did not allow the Steers to sack QB Hunter Tindol the entire night.

EJ Hernandez led SHS in rushing with 107 yards on 30 carries.

Koy Torres had six receptions for 88 yards and Alex Bocanegra had two catches for 17 yards. But the play of the night was in the sixth overtime, when Robert Soliz ran a fade route to the back of the end zone, catching Tindol’s pass for a two-point conversion, securing the Roughneck win.

“When the play was called, I knew I would make the catch. The throw was in the perfect spot and I just had to get my toe down on the corner of the endzone.” recalled Soliz. And it was a catch to remember.

With the new overtime format for high school football, after the second OT and no touchdowns scored, the ball is placed at the three yard line for a two-point conversion.

Senior Grayson Drake, who recently recovered from knee surgery and is now released, had the hit of the game on a Farwell running back for a loss of seven yards on a pivotal play in the third quarter. Drake remembers, “The hit felt good. When I got to the sideline all of our coaches were pumped and hitting me on the helmet.”

Roughneck Nation, along with the Pride of the Oil Patch Band, filled the stands and cheered on our team for almost four hours, sending the Steers home with their first loss of the season.

After the game in the fieldhouse, the Roughnecks celebrated their victory by burning the newspaper article that predicted an 11 point Farwell win over Sundown. That was motivation all during the week as the guys in red and blue prepared for a victory.

Looking back at the memorable win, sophomore Allison Belew stated the game was “intense.” Aria Hogan was amazed at the hundreds of posts by SHS students celebrating the six overtime win.

Senior Gavin Hoover reflected on the night, “It was a hard fought game. The win brought our team together. It showed our team and community the power of family.”

Awards for the week:

Head Coach Adam Cummings was named Dave Campbell’s 2A Coach of the week for the entire state of Texas.

At the midpoint of the season, the team’s overall record is 3-2. They will use the open week to heal some injuries and regroup. District play opens on Friday, October 8 at 7:00pm, as the Roughnecks host the Post Antelopes at Slaughter Field.